Sixty-five years ago I burst onto the world stage from the loins of my Japanese-Hawaiian mother in Montgomery, Alabama.  I promised myself I’d launch this blog today, so the clock is ticking.   I will use this first post to say a little something something about my central beliefs.  If you hold different views, I invite you to express them elsewhere.  This is not a place seeking political debate.

Mother came to the mainland after marrying dad, whom she met on Kauai during World War II.  Dad served twenty-five years as an officer in the U.S. Army, and had to put up with my anti-war and protest marching during my college years at Purdue.  I couldn’t just tromp around carrying signs and stuffing flowers down the barrels of peacekeeper rifles (a contradiction in terms?), though I did both of those.  I  opened my trap to protest tuition fee hikes and ended up quoted in the local paper that was read by my uncle who ratted me out to dad.  Today I express most of my deeply held political views with posts on my Facebook and Twitter pages, but I also dedicate many hours every election cycle to the Democratic Party.

I am a product of, and continue to believe in, a strong public education.  My daughters graduated from  Indianapolis and Van Nuys, California public high schools and Indiana universities.  All three of us have spent years as high school educators.  America’s schools need more funding, teachers need smaller classes, and students need high expectations from involved parents and the society who needs them to excel.  I’ve earned the right to speak my truth about this topic through twenty-three years as a special educator at Los Angeles Unified School District and five years of college communications instruction in Indiana.

After graduating from Purdue, I became an entrepreneur.  My wasband, brother and I owned a retail record store and head shop in Indianapolis called Wonderwall.  I  believe that music is a necessity of life, following close after food and shelter.  The arts are necessary and important to any free society.   Music is in my soul, just as it is probably in yours.  I must sing, and have performed since first grade.  I recently found the mimeographed program from my first grade talent show in Lincoln Park, Michigan.  Mother, who died almost seven years ago, never told me she kept that memento.  Last summer I had the honor of performing a reunion gig with members of my pop rock band from the eighties.  Two weeks ago I was privileged to perform at the 51st Women’s AA Conference with a group of mega-talented singers and players.  Nothing thrills me more than performing.  I barely get nervous, only eager, to be in front of an audience. 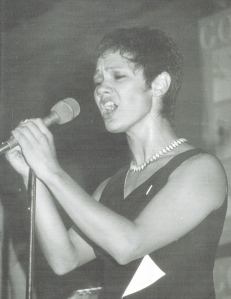 My record store partners & I prided ourselves on selling music at the lowest prices in town.  Our slogan was, “Wonderwall…where you can afford your music habit.”  After ten years, we closed the store for other pursuits.  The store had not been my dream, but I am thrilled to have survived the experience of working for myself (a lifelong fantasy for so many).

That’s all for now.  The rain is trickling down in Toluca Lake, California.  The 2015 Oscars just ended, and I’m headed to bed as an official senior citizen.  I’m inspired, excited, impatient, and ready to rock this town.